When fans of 19th century All -England cricket star H H Stephenson clubbed together and bought their idol a hat in recognition of him taking 3 wickets in 3 balls against Hallam CC in 1858, few present are likely to have considered that in initiating the use of the phrase, it would be relevant to the 30th White Stick Trophy held at Comber some 161 years later, but it most certainly was "en vogue" as the NIACUS umpires secured a "hat trick" of wins in the event in an entertaining and ultimately close affair.

With Paul "Renno" Reynolds back in the hot seat, charged with the brief of securing revenge for the one-sided defeat he last led his troops to at the venue 2 seasons ago, and to regain the trophy after a 2 year hiatus, the Leinster lads looked quite clearly up for the job, some of them even putting the whites on whilst there were still some eye-catchingly tasty looking scones on the go. Renno called correctly, and had little hesitation, with some dampness underfoot, to insert the home side.

With two of the "staples" of this event MIA (Messrs Milne and Seaver) it had the potential to be lower key than usual, but that notion was swiftly dispelled when Willie Clarke appeared from the tea room along with MC for the day, Simon Burrowes. We are fairly confident that Willie hasn't stopped talking from last year's event and his pre-match chat endured both during and after play. Young Simone clearly saw this as a challenge, and on home turf, he wasn't going to go down without a fight, and there would be a few sore ears as proceedings wore on.

Anyway, on to the action. Ronnie "Geoffrey" Balfour and Donacloney's finest, Brian Alexander were the first to the crease, joined with the 2 umpires, Hawthorne and Neill (first time in WST history that both officials were international umpires?). Unfortunately, we didn't get off to the best of starts, Brian losing the timber in the first over to young Willie for a duck. This brought Uel Graham to the middle for his first crack at this event since he passed his umpiring qualifications with flying colours last winter, and he was to be a useful addition to the squad. Watchful at first, he soon got into stride as he and Ronnie steadied the ship. The pairing put on a decent stand of over 70 before Uel was adjudged lbw - he wasn't happy (though having played with Uel for a good few seasons back in the day, I rarely recall him being happy with any decision that went against him).

Highlights of the partnership were the running between the wickets (Ronnie turning many a 3 into a single - "sore thigh, skipper"), a nasty incident which saw Derek Dockrell nearly ensure he never played the sport again as he hit the canvas after a lengthy skid on the boundary, and the zenith of this period of play (and later to be named Leinster champagne moment) when the skipper dived for one at square leg on one of the wettest places of the ground, and came up for air a minute later thoroughly drenched amid a chorus of laughter from less than sympathetic colleagues, opposition, umpires, scorers and spectators.

Uel's dismissal for 45 brought a halt to the progress of the NIACUS effort. Myself and Billy, who had managed a decent stand last season, flattered to deceive and we both went cheaply, during which time Ronnie's thigh had become just too sore after I called him through for a quick single, and he retired hurt, meaning the 2 new men at the crease were Ballymena's finest, Carl "Wonkle" Williams and Jonny "Wicklow" Kennedy. Not too many 50 pence pieces would have been left on the strip with these two in the middle, but they started to wrestle the momentum back. JK had a pleasing looking cameo but it was when Wonkle was joined by next year's Waringstown professional, Jareth McCready, that things really began to swing back our way. Jareth, resplendent in his full WCC kit, lent to him for the day by work colleague Greg Thompson, didn't really display much of the batting prowess of the owner of his apparel (and certainly none of his fielding ability, see later), but he did play some decent shots in a run a ball 13, while at the other end Wonkle was even more fluent. The pair added a brisk 40 or so, Wonkle with 32 from 20 balls (including a brace of maximums), and a total that looked like ending up around a useful 140 or so, ended up peaking at 159/7, which most present thought was cosily above par.

On to the reply, as the younger, fitter squad had their chance (to bat..). Will Houston and Sujay were entrusted with that task, the former very much in the Willie C school of loquaciousness (I'd stick the pair of them in the room for Brexit talks, BoJo would agree to anything after 12 hours with those lads). To be fair, Houston didn't have a problem with our attack as he and Sujay survived the opening burst from Billy Adams and this year's Colin Latham, Dave Williams, the latter proving that pace on the ball isn't always the way forward. It was first change bowler Neal Boomer, fresh from his "Dancing on Ice" impersonations at midwicket, who got the early breakthrough, bowling Sujay for 10. This brought Renno to the crease and along with Will, the pair made decent inroads and upped the tempo. It was with a measure of relief when Wonkle, fresh from his success with the bat, had Renno out lbw (one international colleague giving the other out should make for an interesting first interpro of the year in 2020). That brought young Yash to the crease and the teenage progeny of Bala Kailash showed us all how to bat properly (one assumes his mother is from decent cricketing stock) with a very pleasing knock of a dozen. He will be very useful when he becomes ineligible for this match in years to come.

However, when he was dismissed (Wonkle again, assisted by a Kevin McConville stumping), Will was run out for a well compiled 43 (Wonkle again, we'll never hear the end of it), and in a day he will want to forget after his earlier misfortune, Derek was run out without scoring, we were firmly in command of the game. Our fielding to this point had been interesting, verging on comical - highlighted by Jareth who may as well have effected a synthesised American accent and developed a deep understanding of the cosmos in one particular bit of slow motion fielding (which resulted in a single becoming a 2 becoming a 4) whilst sweeping on the cover boundary.

Talking of the cosmos, a moon on Jupiter has a day that lasts 5 hours, roughly the same amount of time we felt that the next man in had spent at the crease on his last trip to this venue. That's right, in a "brave" captaincy move by Renno, and with the run rate having crept up to nearly 8s, Gorey's finest was sent into battle, none other than Steve Wood who had captivated (*) viewers on his last trip to Comber with a run every 6th ball 12. However, on this occasion, Steve was determined not to die wondering and was on the attack from ball one. He was certainly more positive than in 2017, albeit that bar was not set high, and on at least 2 occasions he did something he didn't do in 70 odd balls last time, getting the ball off the square. Sadly for him and, being honest, for us too, he didn't last long, skying one off Wonkle to Uel at cow to leave his team requiring around 80 with 10 overs left.

Maybe we got a bit complacent at this stage, but in fairness to the Leinster boys, Vinay and Prashant had other ideas on the outcome. They both batted unorthodoxly at times, but it was pretty effective. They put together an entertaining stand that still gave the visitors a glimmer of hope. A tight penultimate over from Billy made their task almost impossible, 19 needed off the last over, and three dot balls from Uel Graham sealed their fate. It is to their credit that they still managed to puncture Uel's figures by slapping the last three balls for 4,6 and 6 to make the final winning margin look like a very nervy 2 runs. Indeed, the watching masses who had repaired to the bar on the lower ground hadn't really been paying attention and assumed when they saw two balls disappear over the fence and the teams shaking hands that we had lost, but the calling of heads to roll was swiftly replaced with the high fives when the news filtered through of the actual outcome.

A tremendous game of cricket once again in this fixture which was as closely contested as it normally is. Colin McClean served up a magnificent spread of burgers and hot dogs for the grateful masses post-match, and the North Down CC bar profit for the weekend must be healthy as everyone stayed behind for a lengthy period of recuperation. The awards ceremony was conducted by NIACUS Chairman Phil Thompson, who with a heavy dose of pathos reminded folk of how this fixture transcends cricket, develops friendships, nurtures sportsmanship and is played in great spirit (we assumed he was watching the Everton Man City game on Sky.). Champagne moments were reserved for Renno for his 3.4 degree of difficulty effort at square leg and to Kevin McConville for his amusing attempt to grab a skier behind the sticks that raised more than the one chortle, while Wonkle deservedly received the MOM for his 32 and 3-24 (plus, remarkably, a run out). The raffle that had been so assiduously arranged by young Simone was conducted raising £400 + for the North Down CC nominated charities, and was memorable for breaking the world record for re-draws (Burrowes having put in all the tickets, not just those sold), Uel winning a prize with the somewhat ironic ticket 664 and Ann McCullough seemingly winning every time a ticket was pulled out (by her) in the latter stages.

A big thanks to the organisers, particularly Colin McClean and Simon Burrowes, the scorers - the ever-radiant Stella Downes and Helen McConaghy -, our 2 umpires Mark and Alan (they counted to six well most times :), and our hosts North Down CC. As Phil noted earlier, it was a great day of craic with friends and colleagues North and South, and we look forward to re-joining battle, once more, in 2020, when we shall attempt the unthinkable 4-timer. Winter well friends. 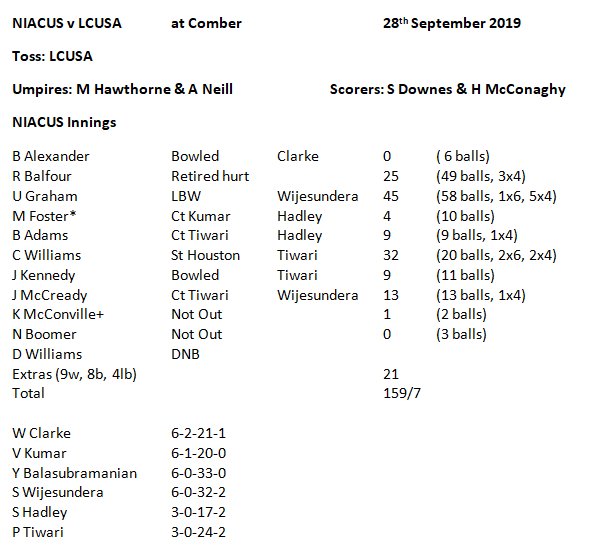 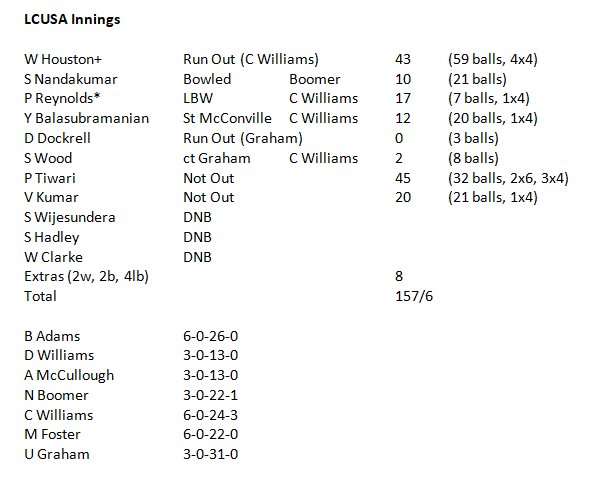