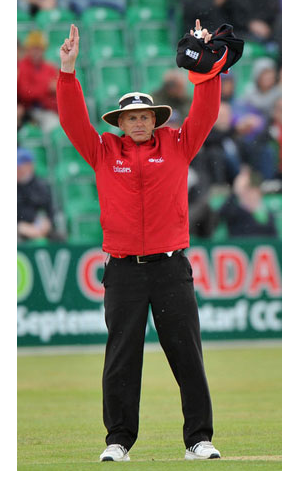 On July 19th I left Belfast to travel to Brisbane, Australia for the ICC U19 World Cup. I travelled with Richard Smith and reading his report of the trip brought back many happy memories for me and hopefully gave you an insight as to how the trip went for us.

There were many highlights during our stay in Australia.

Brisbane itself is a lovely city with a wonderful climate - there wasn't even the threat of rain during our month long stay in Australia.

During our pre tournament workshop I had the opportunity to walk out to the middle of the Gabba with Simon Taufel. Four years ago I had a holiday in Australia with Jenny and during our trip we visited the Gabba ( I also took Jenny to the MCG, Sydney Cricket Ground and the WACA in Perth - how lucky is my wife!!!! ) Never did I imagine I would walk out to the middle on one of these grounds - a wonderful experience.

One of the speakers at our pre tournament workshop was Ian Healey - the ex Australian Test wicket keeper. It was fascinating to hear how he dealt with setbacks and poor performances during his career. He had a strategy and a plan in place to deal with with setbacks - and that is the key - be prepared for setbacks and have your plans in place. He worked very hard off the pitch in doing self evaluations and writing down after every match what went well and what needed to improve and how he could set about achieving the improvement to his game. It was no mere accident that he was the Aussie keeper for so long.

I also enjoyed listening to his views on Umpires. He said there was little difference in terms of decision making between good club umpires in Australia and umpires on the International Elite Panel. However there was a big difference in their match management skills, player rapport skills and the ability to cope with with mistakes and setbacks.

There were 16 umpires at the tournament - this group consisted of the top International umpire from each of the Test playing countries and 6 umpires from the Associate and Affiliate Panel. There will be a couple of vacancies in the Elite Panel in the next couple of years and the replacements will come from the International umpires who stood at this U19 World Cup. I was hugely impressed with some of the umpires I stood with - I did two matches with Richard Illingworth and I notice he has stood in his first Test match recently. As well as being a top umpire he is also a good bloke - very supportive and helpful and very, very funny - he was a good guy to be around.

I was based in Brisbane for the tournament and the Match Referee for most of my matches was David Boon. As the tournament progressed I got to know him quite well - he does have a larger than life personality but I also found him to be thoughtful, kind and very supportive of umpires. He didn't hesitate to meet any team managements/coaches who made life difficult for umpires - he resolved any problems very quickly!!!

Away from the cricket one of the highlights would have been my trip to Surfers Paradise on the Gold Coast with Peter Nero{ West Indies}and Sarika Prasad{Singapore} We had a super afternoon trying, with varying degrees of success, to surf the waves. We made sure we didn't stray too far from the beach lifeguards but much to our surprise they were not required! Talking to one of them afterwards I asked about the sharks but she said it was quite safe - there hadn't been a shark attack for over a month !!!!!!

Another of my personal highlights was the afternoon/evening at the the Story Bridge Hotel with Richard Smith and Ian Ramage{Scotland} See Richard's report and thanks Boony for the tip about visiting this place - it was the best possible way to end our trip in Australia.

Australia is a fantastic country and is blessed with a wonderful climate that is ideal for the game of cricket. I remember when I was very young listening to the radio coverage of the Ashes in Australia and to actually be involved in a cricket tournament in this country has been a dream fulfilled for me.

Hopefully I will have some more cricketing trips in the future but I don't think anything will match the experiences I had in Australia.